From agriculture to industrialization to the Information Age, mankind has made a fascinating journey of innovation. What leads to such innovations? Jared Diamond, professor of geography and physiology at the University of California, Los Angeles, in his Pulitzer Prize winner book Guns, Germs and Steel makes the case that a civilization is not created out of superior intelligence but is a result of chains of developments. That is, innovations are evolutionary. The transition from hunter-gatherer to agriculture led to abundance of food supply. With one of the basic necessities per Maslow’s need hierarchy addressed, people could turn towards division of labor and specialization.

Last 100 years can be summed up as follows: Earlier part of the 20th century was about mass-scale industrialization. Towards the end of the 20th century, emphasis shifted from factories to information. As Daniel Pink, the renowned author of A Whole New Mind, describes we moved from an economy built on people’s backs to an economy built on people’s brains. 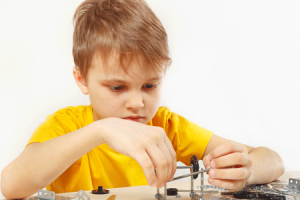 We are now in a Connected Age. An age where information is so connected that it can enable us to do things previously unfathomable. Think of Mr. Anderson or Neo in the movie Matrix; when Neo wants to learn martial arts, a program is downloaded to his brain. Voila! Neo is proficient in that combat form. This scenario is not so far-fetched in the connected age of today. I am reminded of my own experience from a few weeks back … A continuous sound of draining water in my home was keeping me awake. My husband was traveling and unless I was ready to live with the guilt of wasting water, I had to troubleshoot this problem myself. Following the sound of water, I isolated the leakage to a toilet. That was the easy part. The harder part was where to even start to fix the problem. In a Matrix like epiphany, I turned to Google. There it was … 3 possible problems and their solutions. By process of elimination, I got it down to one. My brain empowered with the new knowledge enabled me to fix the problem.

There is no doubt, our world has changed significantly. However, something hasn’t … at least, it has not changed enough.

Before we proceed, let me offer you a choice: blue pill or a red pill. Blue is the blissful ignorance of illusion … stop reading this post right here and return back to your bliss. Red pill is for you if you are ready to embrace the sometimes painful truth of reality.

If you are still reading, I assume that you have selected the red pill …

Take a look at what Mr. Winkle discovers waking up after a slumber of 100 years.

While USA won the most medals in 2008 Beijing Olympics and then again in London Olympics this year, we are ranked behind 22 nations including countries like South Korea and New Zealand in another medal tally. OECD, Organization of Economic Cooperation and Development, with 34 Member countries from around the world from North and South America to Europe and the Asia-Pacific region, ranked USA 23rd in producing graduates in science fields. Brad Smith, Microsoft’s General Counsel, indicates that while USA is producing 120,000 STEM jobs annually, there are only 40,000 STEM graduates to fill those jobs.  My meeting with Kevin Willer, President of the Chicago Entrepreneurial Center, led to a similar picture. His words were “we have a shortage of technical talent”.
What we need is an innovation in STEM education. There is one important ingredient for any great innovation in the world – people’s minds.   Praveen Gupta from the Center for Innovation Science and Applications at the Illinois Institute of Technology in his book Business Innovations describes that a networked individual is the basic building block of innovation.

Innovation in STEM education, thus, needs to impact the fundamental asset – the next generation of great minds.

How do we go about innovating in STEM education? I will address this question in my next blog.

By: Moni Singh, Founder and CEO, STEM for Kids, LLC. Mrs. Singh (aka Ms. STEM) offers a unique perspective on innovation in education through her three lenses: as a mother of elementary age children strongly focused on making STEM fun for kids; as an engineer and a technologist who has brought several technologies to the market, from wireless phones to smart meters; and as a business executive who understands through her work across global organizations that success in the 21st century requires skills in addition to pure technical competence. You can reach Moni at Twitter: @EngineerSTEM and Facebook: STEMForKids